La Côte-aux-Fées is a small village in the Swiss Jura mountains located at over 1000 metres altitude. Winters, often harsh in the region, increase the isolation of this hamlet.

In 1874, at the age of nineteen, Georges-Édouard Piaget set up his first workshop on the family farm where he devoted himself to the manufacture of components and high precision movements. His motto “Always do better than necessary” reflected both his ambition and an ideal of self-surpassing that would continue to permeate the company and contribute to its success. Its reputation began to radiate well beyond the pastures of La Côte-aux-Fées. Soon Piaget would be supplying components and movements to the most prestigious watch brands in Switzerland.
In the twenties, it was under the leadership of Timothée Piaget, Georges-Édouard’s son, that the company transformed from being a manufacturer of movements to become a creator of luxury pocket watches and wristwatches. This development would continue and even accelerate under the guidance of the third Piaget generation of Gérald and Valentin. In 1943, Piaget became a registered trademark. Two years later, a large new manufacturing facility was inaugurated in La Côte-aux-Fées to ensure the Maison’s growing activity.

THE REVOLUTION OF ULTRA-THIN

Going further than his predecessors in the field of ultra-thin, Valentin Piaget would make it a real signature of the brand. In 1957, the mechanical hand-wound 9P caliber created a sensation at the Basel Fair. In 1960, an ingenious micro-rotor concept enabled Piaget to launch the thinnest automatic movement in the world, the 12P. These movements allowed Piaget to establish itself as the brand of reference for elegant men’s watches. 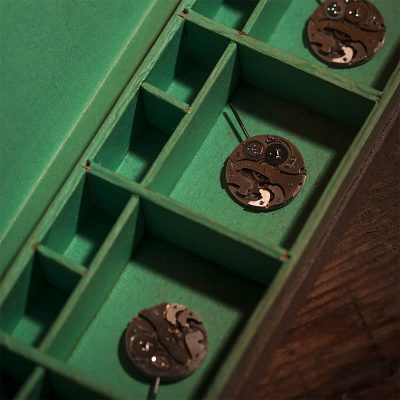 A DEDICATION TO HIGH JEWELLERY

The first “Salon Piaget”, launched in Geneva in 1959, was conceived of as a welcoming place where Piaget could share the creativity of its designers and the savoir-faire of its artisans. Here Piaget’s first jewellery creations made their appearance alongside its most refined timepieces. It was also in Geneva that Piaget set up its own ateliers specialising in goldsmithing and gem-setting, thereby allowing it to master the entirety of its production.
It was a time of relaxed elegance. Piaget would capture this trend and express it in pure gold. The Piaget Polo watch was born in 1979, and in its wake the brand became associated with the sport of kings.

In 1998, as an expression of ultimate elegance and discretion, its ultra-thin watch adopted the name of Altiplano.

Since then, it has continued to fascinate with high jewelry creations deserving of all superlatives. This freedom that Piaget expresses results from a complete mastery of savoir-faire both in its historic home of Côte-aux-Fées and its new Geneva ateliers of Plan-les-Ouates, opened in 2001.

1
If you want to change your privacy settings e.g. Granting consent, revoking consent already given, click on the button below.
Settings